OMG. My pal tweeted about an entry where I referenced an article by journalist Cynthia Macdonald (A Shift in Perception). He used the hashtag #cynthiamacdonald along with that of #heidegger. Upon seeing the two hashtags in close proximity, I conducted a web search with the name Cynthia Macdonald plus that of Heidegger and found the philosopher. And then a search through Wikipedia netted the poet. Many people, one name. And as luck would have it one of them contemplated changing names:

For my father, Leonard Lee; his father Leonard C. Lee; and his grandfather Leonard C. Levy. I have wanted for some time to take back my great-grandfather’s name; had I not been cautioned about the confusion caused by authors’ name changes, this book would have listed the author as Cynthia Levy-Macdonald. In the invisible writing of families, that is how it reads.

That is from the dedication of Alternate Means of Transport.

A well-known search engine produces a reference to “Amiri Baraka” if you go looking for “Leroi Jones”. Some name changes become the sole name that people remember: Ngũgĩ wa Thiong’o. And sometimes librarians and search engines lag behind in recording the biographic details of a name change: the author of The fat woman measures up Donald, C.M. (Christine M.) changed her name to Clare [surname], Hilary. Source: Queer CanLit: Canadian Lesbian, Gay, Bisexual, and Transgender (LGBT) Literature in English. An Exhibition Curated by Scott Rayter, Donald W. McLeod, and Maureen FitzGerald — none of whom to my knowledge have changed their names. The exhibition was displayed at the Thomas Fisher Rare Book Library at the University of Toronto from 9 June to 29 August 2008 and the catalogue is available for download free of charge. For the portrait of C.M. Donald now known as Hilary Clare that appeared in the exhibit see the Canadian Lesbian and Gay Archives site http://www.clga.ca/npc/DonaldCM-2005087-01.shtml [Link now defunct – the Arquives now rotate through the portraits without easy access to the whole collection] 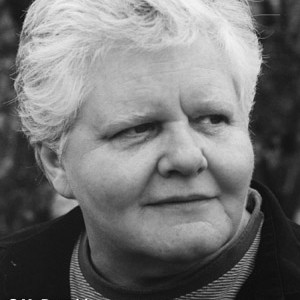