The Company They Keep

Posted on December 30, 2007 by Francois Lachance

On the hunt for Queer Art in Public Space (Outside Galleries) in Toronto.

Andy Fabo in response to a query about queer art in public spaces referenced Douglas Coupland’s Monument to the War of 1812 (2008) in Toronto, which enlarges toy soldiers to monumental scale. It certainly can be given a camp reading.

A whole parkette is devoted to Frances Loring & Florence Wyle. It features four works, including a bust of Loring by Wyle, and one of Wyle by Loring. The Girls live on in the lesbian imagination of Toronto and Canada.

Full Spectrum is a three-dimensional mural that changes depending on the angle from which it is viewed. It incorporates a spectrum of colours on one side referencing both the LGBT community rainbow as well as the full spectrum that is visible to the human eye. Viewed from the opposite end, Full Spectrum becomes a midnight blue with reflective elements, representing the candlelight vigils held in the memory of members of the LGBT community who died from AIDS in the city in the 1980s.

Sometimes the celebratory and commemorative take on a permanent form such as the AIDS Memorial. Sometimes the interventions have been of an ephemeral in situ pop-up nature (one thinks of General Idea’s AIDS poster referencing Robert Indiana’s LOVE which at one time blanketed the city).

The lines between commercial art, agit-prop and street art blur when one considers the Valentine’s Day display in 2011 at Holt Renfrew. Pucker Up was its theme.

Not just Toronto. Consider the 2003 window display at Riverwalk Comme Ça store in Kitakyushu that featured according to the accompanying text representations of families with same sex parents (documented by Ed Pas). 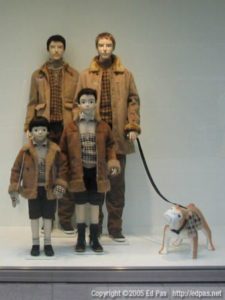 As ever much depends upon the reading and context building.