Aleatory Listening for the Random

In the concluding indictment of technocracy in the Appendix to The Making of a Counter Culture: Reflections on the Technocratic Society and Its Youthful Opposition Theodore Rosazk documents a way of listening to music generated by chance operations.

Where moral discrimination is concerned, the scientific and technical mandarins of the technocracy operate not very differently from the composer of chance music who offers us a chaos of sound: if we do not like what we hear, we need only wait a little longer. Eventually … eventually … there will come a concatenation of noises that charms our taste. At that point, presumably, the score as a whole is vindicated.

The ostensible target (“the lowest conceivable level of moral discourse: ex post facto tabulation and averaging within a context of randomized human conduct”) seems to me far from the spirit of listening to the music generated by chance operations. I’m not sure how averaging and waiting are analogous. Furthermore, there is a difference between the music of chance and chance music. There is a difference in being intent on seizing the musical moment that comes to one by chance (chance music) and being attentive to the music of chance. To observe the random is indeed to test the limits of attention. The not-pattern is demanding.

The two ways of listening or observing are not mutually exclusive. The random inhabits at some level of granularity the patterns we perceive. Take for example, the lovely cover art by Daniel Schwartz to the Doubleday Anchor Book edition of Rosazk’s provocative book. 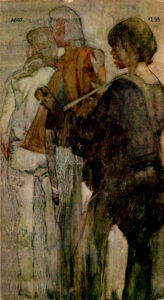 Figures on a ground, yes. Pigment and texture, yes. The random is at hand in the specificity of the material. To listen to the environment and the flow is to find at hand the specificity of the random. The very point that Rosazk is trying to make (respect for the specific, the unaveraged conduct) gets lost in the vehement concentration on the event to come “eventually”. It is not easy to listen as if each moment is eventful. And yet perhaps it is too easy.